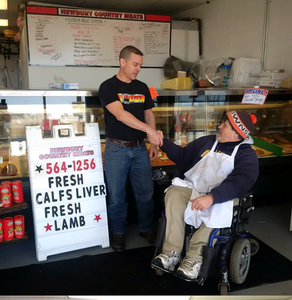 Jason Traggiai, Coordinator for Great Lakes FHFH, shares how he became a Coordinator with FHFH in Ohio.

​My wife Becca and I have been taking our teenage daughters to Geauga Park District events since they were little.  It was a great way to introduce them to the outdoors and gain an appreciation for our gift from God.  I began to get more involved with the GPD when they first started the deer management program in 2008 or 2009.  I was drawn to hunt the archery season at Observatory Park and had signed up to have my oldest daughter as my buddy hunter.  She wasn’t sure she wanted to kill anything, but wanted to go along and experience the hunt.

From the very beginning the GPD staff were very organized and worked closely with Great Lakes Outdoor Supply to administer the qualification and proficiency testing.  It has changed over the years, becoming more streamlined. We are fortunate to have some very talented people working on our behalf at the Park District.

At one of the meetings the ODNR spoke of a new program they wanted to initiate, called Farmers and Hunters Feeding the Hungry.  The ODNR had grant money available to assist with processing costs for hunter donated deer by local butchers.  They had everything in place and were looking for someone to put the plan into motion. My daughter nudged me and said, “Dad, you should do that.”  I thought, no way, I have no time for that.  With her continued encouragement  I relented and approached John Oros and said that I would like to know more about FHFH.  After learning more about the program, I felt  this was something that I would like to become involved. The GPD and the local ODNR were very helpful in getting more exposure for the program. The first year we were able to have five deer donated.  That was the first 1,000 meals we were able to  provide to the needy of Geauga County.

The program has continued to grow not only in donations, but also in Counties we serve.  It has become a family affair for us, driving around collecting coins from donation cans at local merchants or attending outdoor shows and providing information about how the program works.  My personal favorite is when we go to the St. Vincent DePaul soup kitchen in Warren, OH and serve venison spaghetti, chili, or meatloaf.  Everyone always seems so thankful and it reminds me how important the mission of FHFH really is.

The Great Lakes FHFH Chapter (OH-35) now covers Ashtabula, Trumbull, Geauga, Cuyahoga, and Lorain counties.  We just finished up the season with a new record for a single year of donations.  We took in 250 deer or 50,000 servings that were paid for with donations from local businesses and individuals.

Many people think that the deer management program is nothing more than an avenue for a few hunters to kill some meat for their freezer, but it is so much more than that.  It is touching the lives of thousands, but none of them more than it has touched mine.
​
If you are interested in donating to FHFH visit our website at www.fhfh.org or send your donation to P.O. Box 323, Williamsport, MD 21795 and be sure to designate your donation to the OH-35 Chapter.  I hope that every hunter out there bags a buck but hope you will consider donating one too.