Guernsey County FHFH in Ohio is making a difference to those in need and.was featured in the following news article in the Daily Jeffersonian.
​
​Group Received Enough Venison for 10,000 Meals
By Rick Stillion, The Daily Jeffersonian Published: March 26, 2017 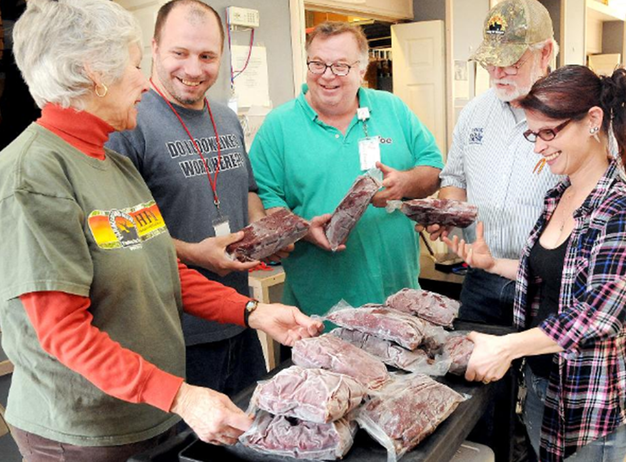 ​​Farmers and Hunters Feeding the Hungry is making a difference in Guernsey, Noble and Harrison counties.

The national ministry with a mission to help provide meat for needy residents received enough venison donations during the 2016-17 hunting season to supply meat for 10,000 meals.

“We want to thank all of the hunters and farmers who have donated deer,” said FHFH Director Kathi Albertson. “More than 50 deer were donated during the past hunting season and that translates to 2,500 pounds of venison.”

Albertson said one family from the Norwich area has donated many deer over the years.

Farmers and Hunters Feeding the Hungry made its final venison donation of the season Friday to Grace Food Pantry in Cambridge. FHFH also donated venison to Lutheran Social Services and other local pantries.

This year’s donation also included a pig from the Guernsey County Fair.

“In the past, we have received donations of cows and pigs raised on farms,” said Albertson. “But, we cannot accept feral swine. All of the processing was paid for by FHFH with no charge to the individual donating the meat.”

The venison was processed at Shirer Brother Meets in Adamsville, Ramage Quality Meets in Caldwell or Boss Bison Ranch in Cadiz. Funding for the meat processing was provided by private donations and various grants.

Grants were obtained from the Cambridge Kiwanis Foundation, Gulfport Energy Corporation and the Walmart Community Grant program. Matching funds were provided by the Ohio Department of Natural Resources’ Division of Wildlife.

“We also need to thank the people who give us money to process the deer,” Albertson said. “These individuals and the grant providers spent several thousands of dollars to cover the cost of having the meet processed in order to feed people.”

Call Albertson, 740-432-5329 or visit the organization’s website at www.fhfh.org for additional information.

FHFH is a 501(c)(3) organization. All contributions are tax-deductible as allowed by law.Guernsey County FHFH